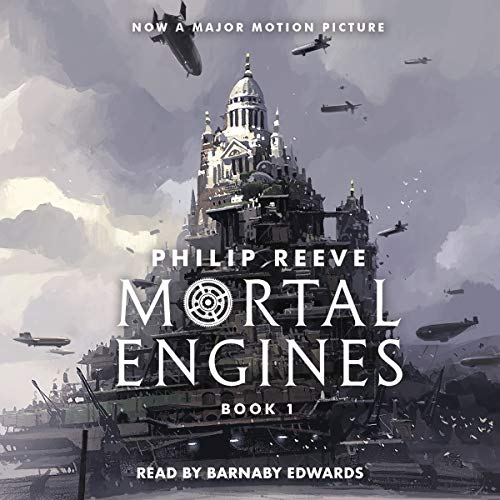 I just finished reading Mortal Engines by Phillip Reeve, a book bought for our middle school classroom. I actually wasn’t that excited to read this futuristic YA fantasy, but I really enjoyed it and rate it 3 out of 4 stars.

The book is very well written and edited, and has two solid plots. The character development is what really makes this a solid story. The characters have strong personalities, but are completely believable with their mistakes, fears, and hopes.

Tom, Hester Shaw, Katherine Valentine, and Apprentice Pod are the main characters. Between the four of them, the two main plots are interwoven and with loyalty and betrayal amongst murders and the destruction of society. Tom and Hester Shaw make an unwilling and intense team. Apprentice Pod and Katherine Valentine seek each other out, but don’t live through the same harrowing events and their bond isn’t quite as intense. Anna Fang, Mr Valentine, and Shrike are all striking characters as well. Without them, the book would be unfinished.

This book takes place in the future, after the Sixty Minute War has completely destroyed life as we know it and cities are forced to ravage each other. Cities are now mobile, and built upward on various tiers. Larger cities scramble after weaker cities until they can overtake them and the parts and people are devoured to be re-purposed by the the more powerful city. Each city, of course, would prefer to be the better city, the more powerful city. How far would a leader be willing to go to be the best? Would they use a weapon from the Sixty Minute War? Who could possibly stop a city from destroying the modern world?

I recommend this book for most middle schoolers. The writing is straightforward and easy to follow. There is very little religion, it’s treated more as mythology. There are angry outbursts, but no swearing. There is death and destruction, but it is written very appropriately for children.

Published by Second Time Around Homestead

This blog is one of the steps we are taking to be more self-sustaining. We’re glad you are along for the ride! Rachel is a freelance editor and writer. Chris is a millwright as well as an expert in many of their fields like hydraulics, snow plows, auto mechanics,...We would prefer to live simply and spend every day together. Our children are 8th grade to early college, as two boys and two girls. We have gardened, hunted, canned, and created our whole life. We began raising chickens and other barnyard fowl. 2021 brought us to some local farmers markets. This blog covers all sorts of aspects of our life, but often relate directly to Homesteading. View all posts by Second Time Around Homestead

Some things happen all the time regardless of other weekend plans…
Snow day means I got a chapter ahead on my book study. Definitely nice to be ahead for a change!
I’m trying to build my connections with my followers. What would you like to see??
I feel like I write an awful lot of vocab stickies.
The ebook and preorders are available now!!
Some of my students are adding books and MacBooks to my bookshelf…

Welcome to our Homestead Sales. We strive to ship out quality goods as quickly as possible. Please contact us with any questions. Dismiss